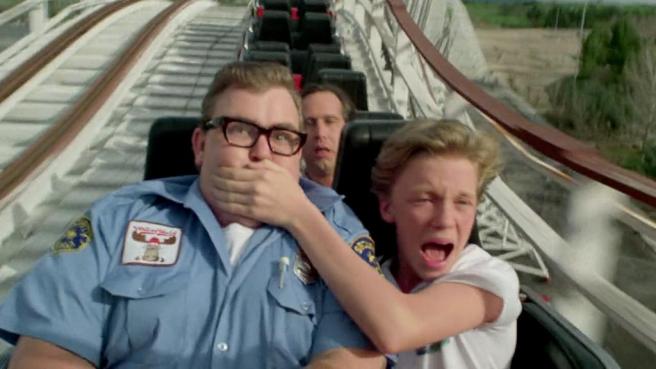 Not satisfied with “boring” methods of euthanasia, Lithuanian designer Julijonas Urbonas has come up with a thrilling alternative: The Rollercoaster Of Death.

In theory allowing willing participants the choice to end their lives with, in Urbonas’ words, “euphoria and pleasure,” the ride only exists at present as a small prototype the artist created as a PhD candidate at the Royal College of Art

The Rollercoaster of Death, a.k.a. “Euthanasia Rollercoaster,” would kill its riders with “extreme g-force”—dropping down 500 meters to then make 7 loop-de-loops, reaching a speed of g-force 10 (100 meters per second). At that speed, one’s blood will rush from the head into the limbs, thus suffocating the brain.

It is the lack of blood to the brain that would, in theory, create the euphoric reaction before death. But a one “Dr. Damasio,” quoted by the Daily Mail, disagrees, pointing out that more likely the rider would puke their guts out before expiring.

Admitting that while it was possible there might be some slight discomfort and nausea while riding Euthanasia Rollercoaster, Urbonas insists the positives outweigh the negatives here:

“The talk on pleasure could also extend to exhilarating sensations that lure millions coaster fans. In addition to these physiological pleasures, I want to stress, the death coaster hints at the possibility for a specific kind of semantic pleasure: an alternative ritualized death appealing to both the individual and the mourning public.”

He also added that it might be a great way to “control populations.”