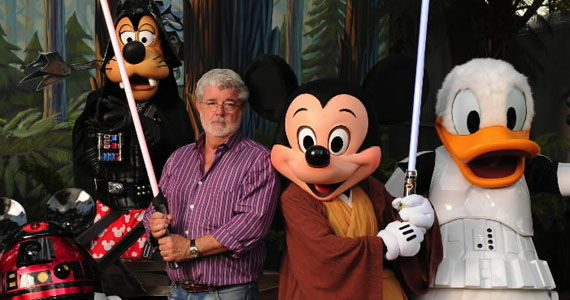 We can safely assume, with a certain degree of accuracy, that at some point after selling off his “Star Wars” empire to Disney, George Lucas threw his arms up in the air and said “Noooooooo!!!”

And it would have been pretty much the same deep-throated wail of horrible realization, closely followed by regret, that Darth Vader emitted at the end of Lucas’s much-reviled prequel series of films. Basically: he sold out to the Dark Side and all he got was this lousy T-shirt (and millions  of dollars).

Recently Lucas ruffled feathers by his off-handed comment comparing selling the “Star Wars” franchise to Disney being sold into “white slavery.” The man has been pissing off fans pretty much since the Ewoks appeared in 1983 (I think people knew enough to understand even he wasn’t specifically responsible for the Holiday Special), so the controversy is nothing new.

Actually, George Lucas has been treated like absolute shit for decades by a deeply entitled legion of aging Star Wars fans who think that they know more about movie-making than the director of fucking “American Graffiti,” and also screw them. To me, letting go of the “Star Wars” franchise was as much about getting out of an ever-deepening abusive relationship with nerd-rage as reaping Disney lucre (indeed, he refers to the new “Force Awakens” movie as like a “break-up”).

But still, the Vader-sized regret is there. J.J. Abrams, as opposed to the way Lucas has been portrayed in the “geek” media, gave the fans exactly what they wanted (well, not the ones who hate black people or feminists, but still…), which was More Of The Same. Just the same goddamn first movie all over again. And it did great. It worked.

In contrast, Lucas tried to be ambitious with the prequel movies, and was publicly crucified for it. Lucas, who used to be that young wunderkind right out of film school who could turn celluloid into gold…Lucas, who, like Anakin Skywalker, was, for a certain amount of time, “The Chosen One.” Who was, like Anakin literally, “sold” to “white-slavers.”

But maybe this isn’t Lucas’s “Anakin Skywalker Moment,” per se; but, rather, that of the franchise itself. Piece-by-piece of Lucas’s influence on the series has been removed over time, just like Anakin’s humanity—what is left is something that is both widely iconic and weirdly mechanized.

Lucas, a devotee of Joseph Campbell’s “Hero’s Journey” theories, must have been aware that every journey has to come to an “end”—and that, to paraphrase a key line from another mega-franchise, “You either die a hero, or you live long enough to see yourself become the villain.”